Why is there a Great Resignation - Claire Robinson 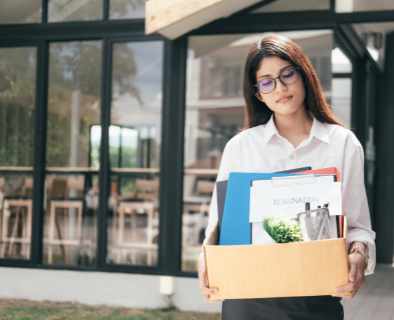 A phrase invented by Professor Anthony Koltz in May 2021 describes the wave of people resigning from their jobs due to the ongoing global coronavirus pandemic, which led many to re-think where, how, and why we work. It is a phrase that has potentially exploded into far more than the original intention of the meaning as employers have been surprised by increasing levels of staff turnover. Published on CNBC Make It Morgan Smith writes that the ‘freedom to work from anywhere has become the most sought-after benefit during the pandemic’

Employers and recruitment companies are seeing and experiencing a mass migration of employee’s is this the case or is it more than movement stopped in favor of secure employment whilst Brexit, global pandemics, and furloughs became the new norm Koltz predicts that a ‘flexible working culture will lead to better work-life balance and improved mental health for employees. “A silver lining of this horrible pandemic is that the world of work will make a huge positive step forward for workers,” he says. “Work will fit around our personal lives rather than our personal lives fitting around work.’ And to a large extent it has, with many sectors pivoting to working from home and as a result of the sudden unprecedented change excepting IT glitch, pet/child interruptions, home deliveries, out of hours logging in and prioritising time/work tasks to fit around the school runs, dog walks, etc. Many companies have done extremely well out of this, employees are enjoying the balance and productivity is high. As more companies and organisations try to return to a pre-pandemic style of work employees are assessing why and demanding change.

Christine Comaford for Forbes concurs as ‘workers began to reflect on their relationship with work. And as they did, they realized that certain aspects of work just didn’t work for them anymore. The traffic, the expensive parking or business wardrobe, the commute, the daily grind suddenly seemed excessive. The call to a higher quality of life—as we considered our mortality—was deafening’

Bloomberg’s Emily Ashton highlights that a poll of 1,226 U.K. managers, conducted between Dec. 9-14, points to a profound shift in the labor market that’s become known in the U.S. as the “Great Resignation.” People from Asia to Europe have been walking away from jobs as they re-evaluate their work-life balance amid high levels of burnout. Emily also points out it is not just resignations either with one in five managers reporting an increase in the number of staff moving from full-time to part-time since March 2020.

CMI Report Making Hybrid Inclusive – Key priorities for policymakers shows the pandemic has driven a huge increase in take-up of remote working, and evidence suggests that it is here to stay

Why are these stats important?

The Office of National Statistics (ONS) reported that online job adverts including terms related to "homeworking" have increased at a faster rate than total adverts, with homeworking adverts in May 2021 three times above their February 2020 average and that of working adults currently homeworking, 85% wanted to use a "hybrid" approach of both home and office working in future. Furthermore, when lockdown restrictions began in March 2020, total UK online job adverts fell and did not return to pre-pandemic average levels until the end of April 2021, however, online job adverts included terms related to "homeworking" reached pre-pandemic average levels by July 2020. By May 2021, such adverts were being posted at 307% of their February 2020 average level.

On a perception level overall, individuals reported the main advantage of homeworking being "an improvement to work-life balance". Another positive was "a reduction in the time taken to complete work" which may be linked to most individuals finding there were fewer distractions when working at home compared with in the office. The ONS found that women were more likely than men to report homeworking gave them more time to complete work and fewer distractions, while men were more likely to report better wellbeing. For men, homeworking aided the creation of new ideas, while for women this was more likely to be seen as a barrier. From a business point of view when businesses were asked why they intend to use increased homeworking in the future, improved staff wellbeing was the most common reason provided, with four in five businesses citing it. Reduced overheads and increased productivity were also common reasons.

When McKinsey & Co looked into What employees are saying about the future of remote work in 2021 they highlighted retention talent at risk with more than a quarter of those surveyed reporting that they would consider switching employers if their organisation returned to fully on-site work.

Recruitment companies are also noticing the trend and desire of people to work from home, highlighting the benefit to businesses as well AA Euro Group report that businesses that are remotely enabled have seen a mass decrease in various costs since adopting this form of a working strategy:

Another key benefit to employers is the amount of financial savings accumulated given the lack of overhead costs given workers are not in the office.

Meanwhile Monster report that Recruiters are gearing up to make some changes in order to stay competitive over the next three years by being proactive and anticipating what candidates are going to expect with the top global initiative for attracting talent and remaining competitive? Changing roles to be more flexible or remote is more attractive to potential employees than the more traditional factors like benefits and salary. However, when they explored what employees wanted v’s what employers were planning they found 44% of recruiters were planning for remote flexibility but only 24% of candidates said that’s what they were looking for with Salary protection and fair compensation, bonuses and Healthcare benefits ranking higher.

In many ways Harvard Business Review (HBR) shares several key insights from an in-depth analysis, and go on to agree with other reports that the ‘Great Resignation’ is being led by a perfect storm for mid level careers. Citing that in the US  Resignations peaked in April and have remained abnormally high for the last several months, with a record-breaking 10.9 million open jobs at the end of July. The HBR began to explore on a global level who has been driving this recent shift, and it revealed two key trends:

Resignation rates are highest among mid-career employees with employees in the 25 to 30 and 45+ age groups experiencing slightly higher resignation rates than in 2020 (but not as significant an increase as that of the 30-45 group). Explaining that the following might be the reason why:

Employers could feel that hiring people with little experience would be riskier than usual since new employees won’t have the benefit of in-person training and guidance. This would create greater demand for mid-career employees, thus giving them greater leverage in securing new positions.

mid-level employees may have delayed transitioning out of their roles due to the uncertainty caused by the pandemic, meaning that the boost we’ve seen over the last several months could be the result of more than a year’s worth of pent-up resignations.

As with other reports mentioned above, many of these workers may have simply reached a breaking point after months and months of high workloads, hiring freezes, and other pressures, causing them to rethink their work and life goals.

Resignations are highest in the tech and health care industries, however, they acknowledge that they identified dramatic differences in turnover rates between companies in different industries. While resignations actually decreased slightly in industries such as manufacturing and finance, 3.6% more health care employees quit their jobs than in the previous year, and in tech, resignations increased by 4.5% concluding that those resignation rates were higher among employees who worked in fields that had experienced extreme increases in demand due to the pandemic, likely leading to increased workloads and burnout.

They suggest taking a data-driven approach to determining how many people are quitting, who exactly has the highest turnover risk, why people are leaving, and what can be done to prevent it. And go on to say businesses need to quantify the problem and determine the impact of resignations on key business metrics, Identify the root causes and develop tailored retention programs.

Dr Isabell Welpe was interviewed by the World Economic Forum and asked if she would foresee companies and organisations offering and expanding such perks being the most talent competitive in the future? responded with ‘We already know from surveys before the pandemic started that an overwhelming majority of knowledge workers would like to work from home and would even be willing to quit a job to work remotely. This is one of the major reasons for The Great Resignation’ Highlighting that during the pandemic, some of the most popular employers have announced that their workers never have to come back into the office regularly again, so it certainly will become an issue of employer attractiveness.

When asked How should organisations be revaluating their future orientation given the new world of work? She replied ‘One of the most important points is establishing a culture of individualized working conditions. Organizations need to know the approximate 5 areas, abilities, behaviour, and rules where they cannot and will not compromise - such as high self-responsibility and conscientiousness or the ability for self-development but remain quite flexible at working times, working places and workplace setups. Indicating that the new normal with more possibilities for asynchronous work should enable a win-win situation for workers and organizations alike.

Will there really be a Great Resignation?

Asks People Management responds with even though the figures suggest that change is afoot, with the number of job positions open in the UK surpassing a million you have to factor in the people that wanted to leave their jobs during 2020/21 and didn’t or couldn’t due to the pandemic, who may want to resign now, remembering that ambition to leave their jobs won’t have gone away, in fact, may have even grown stronger by a change of focus in what they want from work. Ultimately, their decision was delayed, and they have now entered a more stable period where they have greater freedoms and power to choose a place of work.

People Management also highlight there is a growing demand from workers for flexible, hybrid or home working. Employers not reacting to these changes do so at their peril. Those that respond by saying they can’t manage the performance of people working flexibly will be viewed as dinosaurs. They have seen a significant increase in flexible working requests, and it has become a popular question for candidates to enquire about during the recruitment process.